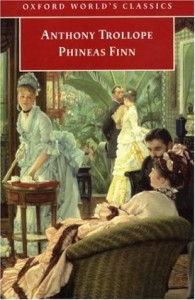 Phineas Finn: The Irish Member (Oxford World’s Classics)
Anthony Trollope
Phineas Finn is the second of Trollope's six parliamentary–or Pallisers–novels. It concerns the political career of a young Irish barrister, who is returned for two different boroughs, both of which are eventually abolished, learns to prize his parliamentary independence over his position in government, falls in love with 4 women, and marries. He also fights a duel and rides horses and attends the great parties and occasions of many members of the upper class, because it is a british novel. He doesn't, however, gamble, and while he amasses some debts and has difficulty about them, they are not on his own account but on those of a friend, and the debts are resolved by deus ex machina, rather than the usual device of "getting money from some lady who loves him."

It is the second in a series, so it is probably best to leave it until you have read Can You Forgive Her, although the story isn't really about the same characters (The Duke of Omnium and his clan, who are minor characters in Can You… are again minor characters in Phineas Finn) and you could probably just pick this one up. But why? If you are willing to read 600 pages of Trollope's musings on the parliaments of the 1860s, why not start at the beginning. Why are we even having this discussion. Read the first one first! 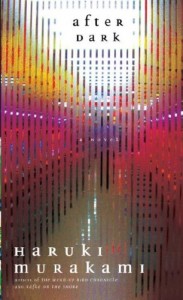 After Dark is, by my count, Haruki Murakami's eleventh novel. Of all of his novels, it covers the shortest time frame (a single night), and in fact it is among the shorter of his major works. It has a lot of trademark Murakami elements: normal people, normal japan, strange parallel universe which intrudes into their affairs. Music. Prostitution. Hotels.

I read it and I enjoyed it, and if you liked any of his other novels (except Norwegian Wood), you will probably like it too. In the weeks leading up to it, I re-read Norwegian Wood, Sputnik Sweetheart, and South of the Border, West of the Sun, and after I finished it, I re-read Wind-up Bird Chronicle, Hear the Wind Sing, Pinball 1973, Wild Sheep Chase, Hard Boiled Wonderland and the End of the World, and Dance Dance Dance. I re-read Kafka on the Shore at the end of last year, so I am reasonably current in my Murakami.

For fun, then, I give you my top Murakami novels in some semblance of order: