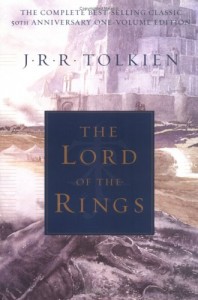 The Lord of the Rings: 50th Anniversary, One Vol. Edition
J.R.R. Tolkien

The Lord of the Rings is a book about hairy midgets by J.R.R. Tolkien, written, you know, just ages ago. The little guys are called "Hobbits," and they have some incredible adventures in a made up fantasy world called "Middle-earth."

The fun all starts when one old "hobbit," named Bilbo Baggins of all things, has a birthday party and puts on a magic ring that he stole from a nasty little midget called Gollum. The ring makes him disappear, to everyone's amazement, and he goes back home to plan one last adventure. Gandalf, a wizard, comes by and convinces him not to take the magic ring with him, because he thinks it is up to no good. So Bilbo leaves the ring in the care of his nephew, named Frodo (who told him these were good names? Maybe if your name is Jrr, you start to get crazy ideas about what names are good), and leaves Frodo in the care of the wizard, Gandalf. Gandalf later reveals to Frodo that the ring is no good™, and sends him on a quest to see some elves and determine what to do about it.

Frodo takes his best "hobbit" friends and goes on a journey that leads him through a scary forest and over rivers and hills, all the while pursued by evil ghost men who stab him, and manages to get to Rivendell (where the elves are) in time for their leader to heal his poisoned wound. Then he takes part in a council of men, elves, dwarves, and gandalfs, where they decide that the ring must be destroyed in order to defeat their great enemy, Sauron (I think this means "Lizard man"). There is much debate about who will carry the no good ring, but in the end, Frodo the "hobbit" volunteers. That very day he sets out with 8 other adventurers–three "hobbits", two men, one elf, one dwarf, one gandalf–to destroy the ring.

The fellowship comes to the land of some other elves, who give them presents and cornbread and boats, and then down the river to a fork in the road, where they have to decide where to go. One of the men decides he wants the power of the no good ring, and tries to take it from Frodo, and then everybody is attacked by orcs, and the group splits into two. Frodo and his gardener, Sam, go on to destroy the ring, and the rest of the party (except the bad man who is dead, and Gandalf who was killed by a whip monster) go on to the big kingdom of men in the south to prepare for war.

On the way to war, the big party meets Gangalf, who has come back from the dead even stronger than before (and in different clothes), and they fight another wizard, and they help some horsemen defeat a bunch of orcs, and they talk to trees. Then half of them go on to the war in the south while the remaining man in the party, who is secretly a descendant of kings, rounds up a bunch of ghosts to help protect the southern shores. Just in time, the king man gets to the battlefield with the ships he has won in battle, and the enemy is staved off. Then, in the wild hope that the ring will be destroyed in time, the party decides to mount a last desperate battle at the gates of the lizard man.

Meanwhile, Frodo and the other "hobbit" discover that they are being followed by the Gollum, and enlist him into their service as they attempt to get to the mountain where the no good ring was made. On the way they meet the brother of the bad man, and fight a giant spider, and spend a lot of time crossing terrible ruined lands, and Gollum betrays them and steals the ring for himself, but, well, it all works out in the end.

Finally, for some reason, there is a lot of genealogy in the book, dealing with the ancestors of the king man, and of dwarves, and a whole almanac of calendars and alphabets. This was my least favorite part of the book.

If you like to read about stuff that doesn't exist1, then you will probably like this book. There is some violence, but no sex. And considering every third person in the book is highly magical, there is very little magic. I'd say it is PG at worst, for its apocalyptic themes.

I understand that some movies were made about this, and that they were well received. Perhaps I will review them one day too.

1. See my review of "Harry Potter," a series of books about junior Gandalfs in school.