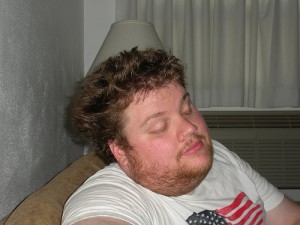 Fourth of July in the Keys

On the fourth of July, I was in the Florida Keys. That's me there, after fishing for three hours in 95 degree heat and considerable humidity. It turned out that the whole point of the trip to the Keys was fishing, though at the time Katie and I went down there, we thought it was just a family get together. Her brother Adam was there, with Kasie and Dylan and Sean, and her parents. Everyone backed out but me for the first fishing trip, so it was me and Katie's father, which was alright. I'm a city boy and  college boy, so the prospect of undertaking a big traditional man activity with my future father in law was daunting, but it ended up ok.

I don't really understand, though, how anyone lives in the Keys. The heat was oppressive, the humidity mind-boggling, and though the hotel was air conditioned, the air could only just keep up, and plenty of the stores we passed on the road were big open air affairs. I'm used to the kind of heat you can escape by standing in the shade, but that does very little good down there.

The American flag shirts were our cult identifiers that day. Katie's mom bought them for everyone on the trip. I was the last one to change out of mine.

The next weekend Katie and I drove up to Washington for Shannon's wedding, just outside of Longview.  We lost a tire just south of Mt. Shasta city, and put the donut on in some very small neighborhood where only three cars passed us in fifteen minutes. We ended up replacing the tire at Mt.Shasta tire on Mt. Shasta Blvd, but as a result we didn't get to our motel in Longview until about 11.

The wedding was lovely and I got to see some old friends, and generally drank and had a good time. I didn't bring my camera because I am bad at camera ownership. On the way back to San Jose, we took Barbie in our car and generally drove in a convoy with the others, and got home again at about quarter to 11. So 26 hours on the road in three days, and this morning was the first chance I had to sleep in, in my own bed, since July 2nd. Naturally it makes me feel a lot more human.