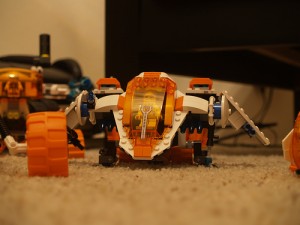 Mission to Mars
It is the future, and on Mars, strange energy crystals have been discovered. A mining operation sent to tap their awesome power comes under attack by creepy aliens, and the miners scramble to turn their industrial equipment into a credible defense force.

So says LEGO magazine. None of that mattered to me when I decided to start building these. I was just happy to see a non-licensed space theme again. The favorite sets of my youth were the Space Police II sets, but for a long time there has been nothing but Star Wars from LEGO's space team. The Star Wars LEGO sets were good, too–minifigures and lightsabers and X-wings and so on–but LEGO is about building and playing with your own imagination, and Star Wars carries a lot of baggage. It's hard to build something from your own collection and integrate it into that universe. Your standard LEGO sets, however, are agnostic. They don't come with the description I just gave. They come with a name, and wordless building instructions. The rest is up to you.

Unfortunately, my imagination started to unearth some troubling notions when I put these together.

But first, the good:

Some of the bad:

On the whole, I don't think my Mission to Mars collection will live very long before being relegated to the parts bin. The sets are clever, but the story isn't for me. Especially with the great stuff available as part of LEGO City. Mars just isn't that compelling.

1 thought on “LEGO’s Mission to Mars”