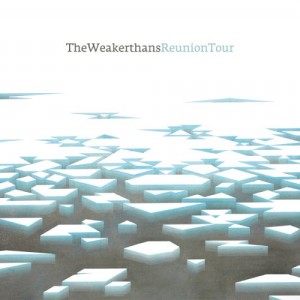 Out September 25th is Reunion Tour by the Weakerthans. In an email to my best friend and old bandmate Rick, I asked him if he was at all familiar with the Weakerthans (the rate at which we pass bands back and forth is unpredictable — I gave him Okkervil River about three months after I got into them, but I couldn't recall a single discussion about the Weakerthans in the six years since I got Fallow as a birthday present from a conscientious girlfriend), to which he responded by sending me a bunch of mp3s from Reconstruction Site, before I timidly admitted that I was asking for his edification, not my own.

After listening to the record half a dozen times (enough, no doubt, to push them past MC Frontalot on my last.fm band roster for the #10 spot), I've come to this decision: it's not Fallow. If you are in the other camp, it's not Left and Leaving. But, like Reconstruction Site, it is a fantastic record. See if you don't like "Tournament of Hearts" and "Sun in an Empty Room." Fans of the last record's "Plea from a cat named Virtute" will be happy to see her return in "Virtute the Cat Explains Her Departure," and then sad when they get to the end of the title. Fans of hockey, I suppose, will enjoy the "Elegy for Gump Worsley," though I have to admit that it didn't particularly touch me.

I guess every band can be identified with one particular song–one you can put on and say "this is what they sound like"–for me, that song has been "Letter of Resignation" from Fallow. It is the ringtone now of the girl who gave me the record. I forgot to put my phone on vibrate on the way out the door, and it rang in my pocket today at work. To me, that is what the Weakerthans sound like. Chugging, muted barre chords, threatening to break out into pop-punk, but suddenly saved by a thin voice and a sweet melody and clever lyrics. There are a few songs on Reunion Tour that don't quite fit into that mold. The opening song, "Civil Twilight," begins with some rotary speaker effect that doesn't exist elsewhere in the Weakerthans catalog, before settling into a more traditional sound, and "Hymn of the Medical Oddity" (more hospitals and doctors) is pretty far from the "Letter" sound. Others, like "Tournament of Hearts," would fit on an earlier record seamlessly. "Night Windows," for some reason, sounds like Death Cab for Cutie to me.