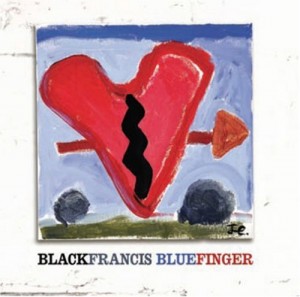 This year, former Pixies frontman Charles Thompson put out a solo record–not, as was the case in the past ten years, as Frank Black–as Black Francis. As such was he known in the Pixies, and the claim that was widely circulating was that it was a return to that style that prompted the name change. Fans of the Pixies have been waiting, primed, for a new Pixies record since the reunion was announced a few years ago, and no doubt this got their attention. I come at it from the other side, because I like the Pixies, but I really like the work released as Frank Black (+ and the Catholics, + and Teenage Fanclub). So I was a little wary, but after all, he had been working with Joey Santiago on his recent records, and the reformed Pixies played all of those shows, so perhaps he had recaptured the spirit of the Pixies after all.

But then, of course, the first track on Bluefinger is "Captain Pasty," which, honestly, sounds like a Catholics-era B-side. The lyrics are slightly more nonsensical than regular Frank Black, but the singing is pretty straightforward Show Me Your Tears, not much at all like Trompe Le Monde (the last Pixies release, the last legitimate Black Francis vocals). The second track "Threshold Apprehension" is at least halfway Pixies-esque, and maybe it was the inspiration for the name change, but then there is a track that sounds like a Stray Cats pastiche, and another vaguely Catholics-y song, before "Tight Black Rubber" again half sounds like something that you would be willing to call  Black Francis.  Four songs later, "You Can't Break a Heart and Have It" is almost hard enough to be a Black Francis song, and he tries his best to scream it out. But that's it: 3 songs out of 11 sound anything like what you would expect the record to sound like after the name change.

I'm not sure that's a fair assessment. The man certainly has the right to call himself whatever he wants, and why can't Black Francis in 2007 sound different from Black Francis in 1991? He has aged 16 years, after all. And Fast Man Raider Man, his last Frank Black release, really doesn't sound a damn thing like Teenager of the Year, the iconic Frank Black record. But there you have it. We were expecting a Pixies record.

Is the record terrible? Certainly not. Is it inspiring? I would say no also. Honeycomb is still the best of the recent crop. Dog In The Sand is incredible. Pistolero was strong before it. Teenager of the Year is a classic. Bluefinger is merely good.

An addendum here: if you follow the links over to last.fm, you will see that my profile is reporting this record as being by "Frank Black Francis," an oddity of last.fm's database that awaits correction. I assure you I have my records properly tagged.