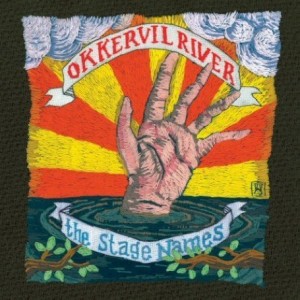 This year, Okkervil River released a record called The Stage Names. I'm sure everybody has Black Sheep Boy already, and I know a lot of people went out and picked up records from the Okkervil back catalog after BSB came out, so I won't bother saying to much about the band itself here. My experience with them has been principally this: on every album there is a song that makes you say "THIS! Why couldn't the rest of the album have been like this!" So when I think about Okkervil River after the fact, I usually think of them as a band that isn't living up to their potential somehow, but that's not fair. I never complain when I listen to them.

A number of years ago, Jesus, 98 or 99, I guess, Jets to Brazil put out a record called Orange Rhyming Dictionary, which made its way around in my little musical circle, being loaned from person to person, with each person eventually going out and buying their own copy. That album has an incredible first three songs. Sometimes I think that's the best way to get people into a record: stack the best three songs at the top. If someone is amazed for three songs in a row, they will buy the record.

I'm making the comparison here, but I'm not going so far as to say this is another Orange Rhyming Dictionary, which is a kind of top 10 record, but I am pretty sure that if you get to a music store where this is on a listening station, and play the first three tracks, you will walk out with the record. If you have the ability to find songs on the internet to preview, that is "Our Life is Not a Movie Or Maybe," "Unless It's Kicks," and "A Hand To Take Hold of the Scene." For the record, after that is the beautiful but much lower-key "Savannah Smiles," which makes 4 very strong songs to open. My favorite of the record, though, is number 6, "A Girl In Port," although as with many of my favorite songs1 the lyrics probably don't bear printing out.

The last three tracks are the weakest in my opinion, though I'm sure there is someone that they appeal to. 8 reminds me of "I Can't Help Falling In Love With You" by Elvis Presley, or, for a small minority of you, UB-40. And 9, well, You will figure out what 9 reminds me of soon enough. So 6 good songs out of 9 (I know I didn't mention track 5, but it's good too), and in general, an album that is a worthy successor to Black Sheep Boy.

1. This does not apply to the Weakerthans (see my last review), who usually turn out songs that make absolute sense if you write them as prose. Try it sometime.

2 thoughts on “The Stage Names”